In The Tracks of Giants - A Trek for Conservation

Tracks of Giants: Biking the Interior, Namibia from The WILD Foundation on Vimeo.

Tracks of Giants is an initiative of the WILD foundation,an epic trek from Namibia's frigid western Skeleton Coast to the eastern shores of the warmer Indian Ocean,"connecting major conservation nodes to promote a greater awareness of conservation, human community and leadership issues specifically relevant to southern Africa." This video profiles the Kaokoland/Damaraland part of the trek - an area very close to my heart, with insights from pioneering local conservationists Margaret Jacobsohn & Garth Owen-Smith, amongst others. The project is being filmed by experienced cameraman & producer Nick Chevallier.

More about the initiative on the WILD site and follow the treks progress on Facebook.
Posted by Unknown at 4:51 AM No comments:

Unbeknown to me at the time, this was to become the cover image of the book. At the time I had merely snapped a shot of the ochre pots as a record of these traditional Himba 'make-up' accessories. The striking red ochre is central to the daily routine of all Himba women, who lather this mix of soil and butter fat into their body. The red ochre is derived from a red soil/stone which is typically crushed into powder form with a stone pestle. The pots themselves are made from cow horns, with leather lids and bottoms. Plastic is beginning to replace the cow horn in some communities.

When it came to selecting a cover for the book, I had initially expected an image of a desert-adapted elephant to grace the front dust jacket. Struik/New Holland in-house designer Janice Evans clearly had other ideas - and an eye for a striking image! Complete with the text the image really comes into its own, as you can see below. 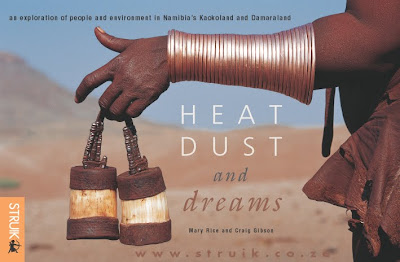 Posted by Unknown at 6:17 PM No comments:

Iceland: Land of the Midnight Sun

This awesome time-lapse footage, courtesy of Scientifantastic is enough to get anyone get on a plane. The sun never sets during summer and is always visible at this time of the year. Surreal and stunning footage.
Posted by Unknown at 7:59 PM No comments: 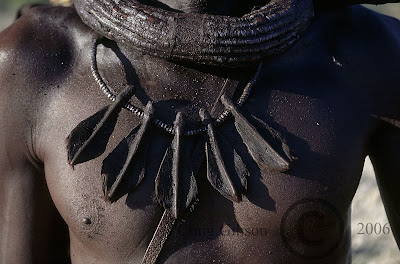 The Himba are inventive with their decoration and ornamentation - here a man has fashioned a necklace from goats ears. More photos of this to come, largely drawn from the book I published on this area, Heat, Dust and Dreams.
Posted by Unknown at 8:05 PM No comments:

This is an awesome film from Thomas Roebers that cleverly makes use of everyday village life to introduce us to the unique rythym's that underpin much of life in Africa.
Posted by Unknown at 7:05 PM No comments:

This is a short animated travel journal from French director Bastien Bubois, recently nominated for Best Animated Short film at the Academy Awards 2011. Using a number of different techniques and touching upon the music, culture and textures of Malagasy life.
Posted by Unknown at 6:40 PM No comments:

A Himba elder casts an elegant silhouette against the mud daub wall of his home.  The Himba are semi-nomadic pastoralists that inhabit the remote north-western corner of Nambia - a region of harsh, largely waterless semi-arid desert.  More photos of this to come, largely drawn from the book I published on this area, Heat, Dust and Dreams.
Posted by Unknown at 6:45 PM No comments: